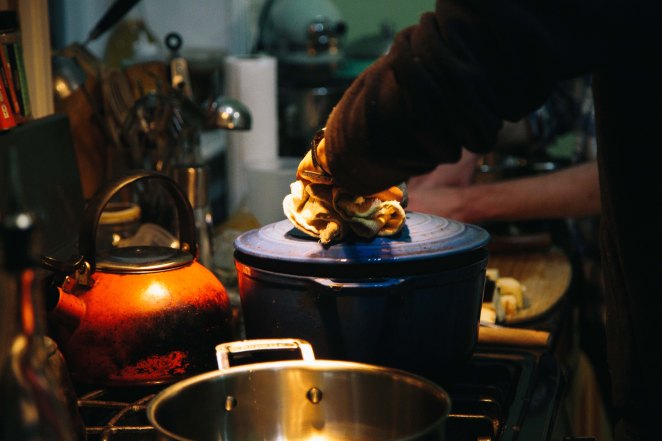 Reviewer: Janae Goldsmith
In My Pockets
I’m a queer poc living in West Philly. I had just flown in the night before from my old stomping grounds with a bagful of memorabilia and a heart full of family. I enjoy experiences that don’t fit into the “traditional” theatre model. I met Shreshth in the performing arts community, and we’ve broken bread before.
Design
Immigrant Kitchen is part play part chef’s table. A journey in myth, memory, and communion – seamless storytelling in an intimate space. Immigrant Kitchen is simultaneously unfolding and sharing old memories while making new ones.
The design to my eye was entirely practical. The piece took place in a lovely West Philly community house. The feeling was no frills, just warm and real. I’d say the ingredients and the cooking ware were the strongest elements of design – if not the characters themselves. Lentils and okra have taken on new meaning for me, and I must say I love me some pressure cooker action woven into storytelling.
Performance
Shreshth Khilani’s performance is one of a life still being lived. To that end, in a sense, life is a performance that begins before our arrival and continues after the audience has left. Shreshth weaves in and out of the roles of host, storyteller, and facilitator seamlessly. The moments of stillness and circling gave me a sensation of something churning beneath the surface that inevitably must be released.
Direction
Jeremy Cohen’s direction is deft, threading together multiple ingredients with strains of linear and nonlinear narrative. The piece also carved out space for the audience’s journey, and for any myriad of responses therein.
Writing
Immigrant Kitchen begins with the breaking of bread (papad – the only thing served that we did not cook ourselves), and a guessing game of ingredients. We discuss a foodie article in the New Yorker that lead to an approximation of nostalgia. This conversation planted seeds for the narrative, and opened the space up for whatever input or memories might arise among individuals. We followed Shreshth on a journey of sense memory and nostalgia, a story of femininity, maternity, queerness and becoming. We learned lessons from Arjuna and Amba, all while participating in the production of a delicious and medium spicy meal which we ate after the show was “officially” over, though the sharing of intimacy continued.
Accountability
Immigrant Kitchen is for folx that want to be themselves and be with others. This play is for immigrants, emigrants, queer, gender nonconforming people. It’s for people who have traveled here and are willing to share and listen and learn on the journey.
It’s always refreshing and heartening for me to see a queer, gender nonconforming, POC sharing their story and spearheading the project in its entirety. I look forward to more!