Inis Nua – Monster in the Hall 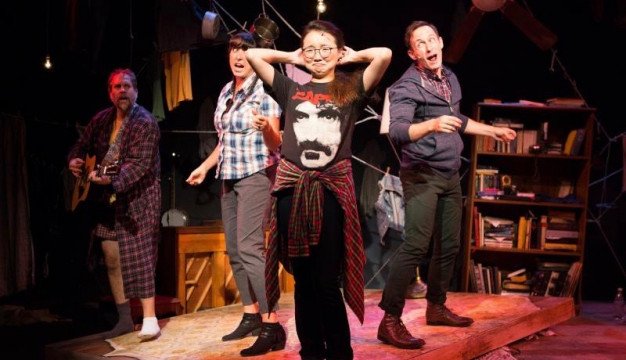 I know a few people in the cast and crew, and to be honest, it was a terrible weekend and I wasn’t sure I was ready to watch something uplifting just yet. But in the end, Monster was a really heartwarming experience.

Lights: (Amanda Jensen) were functional and served both the spoken scenes as well as the musical numbers well, successfully evoking the different musical tones of different songs as well as keeping things well lit enough to support the comedy.

Sound/Music: Edward Smith mixed a well-balanced play and there wasn’t one glitch in the sound. The music (Moonglass and Jamison Foreman/the ensemble) was, for me, the glue that held the show together. The program says that the original production had music by Moonglass and that the Inis Nua production filled in the gaps and added new content, and the result is near-constant underscoring, primarily by Foreman on piano. At moments I wondered if it was stylistically a little more “musical theatre-y” in sound than the show wanted, but for the most part it kept the almost farcical pace up while maintaining the sweetness in an incredibly welcome way.

Costumes: Natalia de la Torre designed lovely costumes that supported the story well, with the piece de resistance being a fantastic “Fairy of Catastrophe” ensemble worn by multiple actors. The piece featured a trash bag tutu, wand, and tiara. A show like this which relies on a base actor look and layered character pieces on top can be really difficult to design. Oftentimes that strategy is challenging – you have to make the pieces simple enough that they can be taken on and off multiple times with little fuss, and de la Torre got it bang on, right down to the tiny sharpie doodles on Duck’s chucks.

Set (Apollo Mark Weaver): the set is dizzying and very successful– two large overlapping platforms form the primary playing space. My fear about the actors slipping of them really added to the sense of precariousness that is the driving force behind the play. Laundry-line-like cords littered with clothes and junk fill the rather high ceilinged Bluver theater space in a very satisfying way, and the platforms are buoyed by trash detritus featuring a lot of UK exclusive food that I really appreciated. The curtains on the far sides of the space (initially they read as discarded bedsheets) could have been a hair wider. They were used for quick change hiding spaces, but occasionally I could see actors struggling to stay behind it while changing. Overall I was incredibly impressed with this set.

Props: The props, designed by Sarah Sindelar, were simple and functional with a nice eye to detail– I appreciated the contents of the center stage bookshelf which crucially featured a full set of Harry Potter books and others that would definitely inform Duck’s taste in literature.

This cast was so talented. They brought a tremendous amount of ease to a show that really does not pause for breath. Claris Park sets the tone and keeps up the energy in a show that really centers around their character, as well as really delivering on both the ukulele ballad and rock anthem fronts. Moyer could not have cast a better actor than Doug Durlacher for Duke– his sweetness and face-value awkwardness could easily have been overplayed for comedic value but struck the perfect balance. Eleni Delopoulos is the character actor this show needs and plays the biker anarcho-feminist just as sympathetically as the salt of the earth social worker, while also wailing on the banjo. Jamison Foreman is most invaluable as the provider of the musical air beneath the wings, but absolutely keeps up with the ensemble, notably making the jerk love interest somehow likeable. The ensemble work was seamless and delightful.

What a smartly directed play! The casting was great, and the show walked the tricky tonal balance of a play-with-music that was not a musical, a farce with 15+ characters played by four performers, and yet still managed to be heartfelt. Claire Moyer did a lovely job. It sounds like she was handed a show that gave her a lot of creative freedom, and the result was pretty pitch perfect (no pun intended).

At face value I don’t know that the play itself, or even the way it’s being produced, has much of a social agenda, but it meant a lot to me watching a show with a POC lead in a role that is in no way about her being a POC. Claris Park is a gem and I was so glad to see an up and coming Philly actor in a leading role. I hope Inis Nua continues to prioritize casting actors of color in roles that don’t require it.