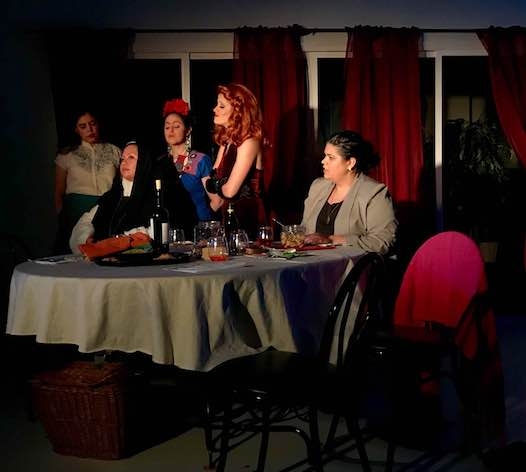 I was first introduced to Power Street through Erlina, the playwright of Las Mujeres, while the two of us were working on a project together. I was really impressed with She Wores Those Shoes and Erlina’s voice as a playwright. As a Latino, I was particularly looking forward to seeing Latinx theatre, since, let’s be real, there ain’t that much in Philly no matter what these trendy “diversity panels” say.

Since I’m unloading my pockets, I also need to admit that I’m a bad Latino for not knowing Sor Juana Inez de la Cruz and (Marga)Rita Hayworth until this play.

Since the set was an apartment, I didn’t need much from lights. I thought Ro Gauger did a great job creating an atmosphere of magical realism as Marlene is transported from our reality into the world of her dreams.

The lighting when Minerva Mirabel finally learns how she was brutally murdered by order of the evil Dominican dictator, Rafael Trujillo elevated the tension of the scene and Minerva’s tragic revelation.

I really want the colorful disco light that was used when the womxn had a dance party. I was not expecting to see the historical figures dancing to Soy Yo, but I’m glad I did.

The music for Las Mujeres was well selected! I was hooked from the moment Marlene played La Llorona on her record player. La Llorona is one of my favorite Latin American legends and I really appreciated how it introduced us to Marlene’s character. She could not cry even if she forcefully widened her eyes and listened to the most depressing song in the history of the Spanish language. Later, when Marlene finds what Lena had in her backpack, she weeps and becomes La Llorona.

Asaki Kurama’s costumes nailed the styles of each character’s historical moment. Added touches like Minerva’s butterflies in homage to her sisters really showed that Kurama paid attention to the most minute details. And Lena’s #newworldmatriarchy shirt was perfect!

The set fit the space extremely well. Using the structural pillars that already existed in the theatre to frame the walls of the set made for a seamless transition between the audience space and Marlene’s living room, although I was worried the wall with the door was going to come tumbling down each time the door was closed. The curtains that were rigged to be quickly and easily ripped off could have been less obvious and the stage magic better hidden. It made the satisfaction I was supposed to feel as Marlene tears the curtain off the rod a tad underwhelming.

I also found the projection to be questionable. I didn’t know if it was the aesthetic or a tech snafu that the projections were half on the bare wall and half on the floor of Marlene’s apartment but it made seeing the images difficult.

There was so many wine glasses on stage. It caused a handful of frantic “gotta-find-an-empty-glass-to-do-my-blocking-in-this-scene” moments! However it was fantastic to see Frida Kahlo offer Sor Juana Ines de la Cruz a shot of tequila!

What a stellar ensemble of Latinas that Power Street assembled for this production! They had fantastic chemistry with one another and personified these historical figures.

Krystal Lizz Rosa’s portrayal of Lena as a loud and proud social justice warrior made me wish she was my daughter. Krystal’s Lena was the perfect foil for Gabriela Sanchez’s Marlene. I really connected to her character, especially when Marlene discussed how she anglicized her name to better navigate her world, something that I absolutely related to! I have also gringo-fied my name throughout my life but have recently reclaimed it for the exact reasons as Marlene in this play. The scene put my struggle into words, and it felt great to be represented.

Speaking of people that attempted to conform to the ideals of whiteness, Lorenza Bernasconi’s chilling portrayal of movie star Rita Hayworth was particularly vivid.

Marisol Custodio presented the Dominican revolutionary as fearless and loving. She reminded me of Snow White or a Disney princess. It made it even more shameful that an evil monster like Trujillo took someone as smart and nurturing as Minerva from our world.

My favorite on-stage duo was Daniela Rodriguez as artist Frida Kahlo and Anjoli Santiago as Sor Juana Ines de la Cruz, a Mexican nun, poet, and scholar. Frida’s over-the-top personality complimented Sor Juana’s calmness. The contrast made seeing them get cozy on a couch after smoking a joint together even more hilarious.

Unfortunately, the play lost its momentum after the bows when the cast announced that they would be presenting a slideshow of the womxn that supported them through the play’s process and in general. This wasn’t the ideal time and it dissipated the energy.  It was a tad awkward to sit through but as I watched the cast gaze admiringly at their role models, I also reflected on all the Latinas and womxn that I am thankful to know.

Ortiz created a unique voice for each character. It felt like she had exhumed their souls and let them tell the story that their art and biographies could not.  I felt like I was sitting around the dinner table chismeando with my tías and primas about the latest family gossip.

I wanted more Lena. Her character served as a bookend to incite Marlene’s dream about the dinner with las mujeres and wrap up the play and I would have liked to see more development.

It is great to see empowering Latina roles exist where Latinas have access to complex and intelligent people that aren’t lazy stereotypes or generic maids or the punchline for a lame joke about their accent.
Accountability:

I had issues with Frida’s mobility. With so much controversy over the Frida Kahlo Barbie and celebrities saying that the death of Stephen Hawking “freed” him of his disability, I have problems with Frida being portrayed as able-bodied in this play. Frida developed polio at a young age and then when she was 18, she survived a near fatal bus crash that caused her to be disabled with a broken spine and pelvis. It was while she was bedridden that she began painting the self-portraits that we now see in museums and books. I wouldn’t have expected Frida’s movement vocabulary to include the flexibility to put her foot on furniture. It didn’t match the icon I knew and the life she lived. Ortiz does give Frida lines about terrible pains so I didn’t understand why she was moving around on her feet and standing so much.

Outside of this concern, Las Mujeres is a celebration of Latinidad. It made me feel more connected to mi gente and my history and thinking about how many other incredible historical Latinx figures I don’t know about.

Why didn’t I know about Rita Haywroth or Sor Juana before this play? What system prevented me from connecting to the fascinating lives of people just like me that have names that look and sound just like mine? Shouldn’t I have learned this at some point before now?