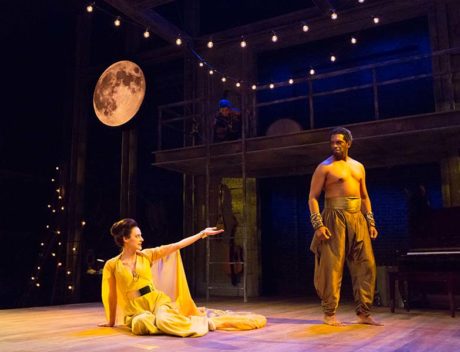 Valancy is a Philadelphia area actress and producer

As for what’s in my pockets, I came in with some mixed emotions. I’ve been in two productions of “Midsummer” and have seen several others over the years, and so the idea of seeing yet another production felt more like work than enjoyment. I didn’t think it could possibly hold any surprises for me, and I generally find the fairy world far too cutesy to be charming. However, I always really enjoy Dan Hodge’s work as a comedic actor and have a great deal of respect for Matt Pfeiffer’s directorial work, and they were enough of a draw for me.

The emphasis of this production was on the acting and original music, composed by sound designer, Alex Bechtel. The rest of the design was largely minimalist, particularly the set, designed by Paige Hathaway, which was a large open space with a piano and an upstage balcony, with chiffon drapes hanging from it. From my seat, I could glimpse a faux dressing room, with props and costume pieces artfully arranged for the players. The simplicity of the design gave the audience the opportunity to focus on the text and individual performances.

It seems to be fairly standard practice now in Philadelphia’s Shakespearean productions to find the actors already on stage performing or warming up before the play begins. I admit to feeling initial dread when I walked into the theatre and found the performers gathered around the piano on stage in mid song. I couldn’t help but feel I was interrupting a private party; were they the characters in this moment or the actors, did I have a responsibility to make eye contact and smile my approval? My discomfort was quickly allayed by the sheer virtuosity of the performers, which you might expect when Rachel Camp and Mary Tuomanen take turns leading the music, and it certainly set the tone for the rest of the evening, where lovelorn women sing out their innermost feelings as they wander through the wings, and Titania’s fairy (there’s only one in this production, thank goodness,) accompanies herself with the violin, invisible to wandering Puck.

The costumes, designed by Olivera Gajic, while part of me wished for a bit more opulence, particularly among the mortals, who represent the highest strata of Athenian society, served the purpose of indicating who each of the characters was and how they interact with the world. I particularly loved Helena’s (Rachel Camp) glasses, which she used to great effect, and the stunning golden chiffon drapery that trailed behind Titania as she moved slowly across the stage on her first entrance, giving the impression she was a celestial body moving across the nighttime sky. It took me half the play to realize that the four lovers were beautifully and subtly color coded in various degrees of peaches and blues, which I consider a mark of thoughtful design.

Gljic had the added responsibility, which she executed well, of helping the audience to differentiate between the lovers and the rude mechanicals, who were, for the first time in my experience, double cast. One of the many surprising choices which paid off well.

There were two components to the lighting design (Thom Weaver) that struck me, and both were tied directly to the set and staging.  Strings of white lights hanging over the stage, reminiscent of a garden party’s decor, were lowered when we entered the fairy world, giving the sudden impression of intimacy, magic and romance; and Puck pulled the lit moon up to its zenith on a pulley system, which let the audience peek behind the imaginary curtain at the theatrical mechanics and yet added to the sense of magic by showing how Puck and Oberon control and manipulate the world around us.

As well as I know this play and assumed I had seen every possible choice there was to be made, the actors illuminated the text and brought the comedy to life in ways I had never imagined. The lovers are usually played as the thankless “straight men,” and the comedy is generally left to the mechanicals and the play within the play. In this production, the comedy never stopped, even when the lovers seemed to have reached utter despair, and their physicality and guttural groans, sudden realizations and snap decisions, fights and counter fights all added to the hilarity of the play. One such moment came when it suddenly occurred to Hermia (an energetic Taysha Marie Canales) that she has been betrayed by her friend Helena (Rachel Camp.) Walking away, she removes her earrings and pockets them, and the audience hasn’t a doubt about the violence she intends to unleash.

Lindsay Smiling exuded power and sexuality as both Theseus and Oberon, but quickly turned into the chastised child in the hands of Hippolyta/Titania, played by understudy, Paige Farestveit, in the performance I attended. Knowing she was the understudy made me even more impressed at her handling of the unforgiving trailing chiffon and the incredible physicality of her relationship with Bottom. It’s a testament to the strength of the production and individual performances that I now want to return and see Katharine Powell in the role.

I have never seen a stronger ensemble of actors tackle the rude mechanicals, who, 400 odd years on, have a daunting familiarity bordering on the cliche. We all think we know Bottom and all his tricks and bellows, and Snout’s portrayal of the stoic wall couldn’t possibly have any revelations for us. I was gratified to find all of my preconceptions forgotten as soon as the  players were introduced by Quince, delightfully played by Doug Hara, who brought a rare and simple genuineness to the role and brought into focus the fact that he is, after all, a director trying to manage the many egos of the actors in his employ, with opening night fast approaching. He quickly elicited the audience’s full sympathy.

One of the unexpected moments of humor among the mechanicals came when Starvling (Brandon J. Pierce) was assigned the role of Thisbe’s mother in their play. His wordlessly eloquent response was to wilt ever so slightly, from face through the core of his body, and then with resignation nod his head slightly and return to his place in line. Beautiful simplicity that tells you everything you need to know about him.

Dan Hodge’s Bottom was a revelation in comedic timing and theatrical bravery. He held the longest sustained pause I have ever witnessed in the theatre, a science turned into art, and the audience’s response swelled from a slight titter to growing waves of hysteria as we waited to see if he really had the iron to maintain the pause past the point of no return to its required conclusion. I’m now hungry for more moments like this on our stages, moments the public will never forget because of their unique and unflinching power.

I deeply appreciated the racial diversity and gender bending nature of the casting, and the fact that it was an aspect of the production that did not draw attention to itself, but simply was, made it even more obvious that it’s a practice that should be universal. All the couples were mixed race, two of the mechanicals were women, including Snout/Wall (Taysha Marie Canales) and Snug/Lion (Rachel Camp) and Puck was played with blue haired mischievousness by Mary Tuomanen. Her rapport with Smiling’s Oberon turned them both into delighted children planning and plotting their capers, observing all from the overhead balcony while smoking a hookah.

In his director’s notes, Matt Pfeiffer says he loves the sense of abandon and play in “Midsummer,” and that is certainly apparent in his staging of it. It’s fun to watch and I think, probably, just as fun to be in. It struck me that even in the precision of the performances, there was a sense of danger and improvisation in them, and the collaboration during rehearsals between director and actors must have been free and open. Perhaps that’s what Pfeiffer means when he says that he’s deeply interested in figuring out how Shakespeare’s company would have worked on this play with the tools they had available to them… namely themselves and each other. I am always thrilled to see productions where the actors and what they bring into the room are respected and encouraged to take huge leaps. And when a play as old and tired as “Midsummer” often seems to be is suddenly made modern and immediate, we have reason to celebrate.