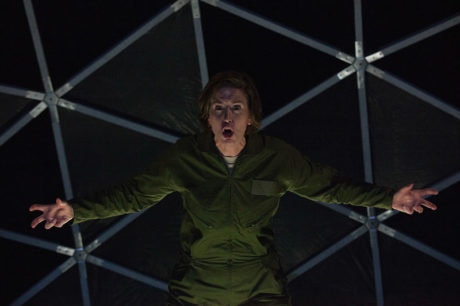 Nan is a cis white-ish actor/maker, an intersectional feminist, queer, and debatably white/nonwhite?

Tenara is a white, Jewish, dual-citizenship carrying feminist. Creator/performer/thinker. Despite all odds, she is excited about the future.

Nan: Shall we empty our pockets?

Tenara: Absolutely! I’ve met George Brandt at a workshop once but I don’t actually know him very well. I’ve also never seen one of his shows before, so I was really excited about Grounded.

Nan: I didn’t know anything about his work coming in! I’ll have to keep an eye out now. I had very little in my pockets– I know Kittson O’Neill’s work a little, and the same with KC Macmillan. This was also the first InterAct show I’ve seen! (Shamefully)

Tenara: Actually, same! I moved to Philadelphia this summer, so I hadn’t seen their work before either, but I’ve heard good things.

Nan: Ditto. This was also my second time seeing a show in that theater in the Drake, which was exciting. What a great space.

Tenara: Yeah, I thought the visual world of the play was really enticing.

Nan: Agreed. The single large set piece (if you choose to call it that?) gave me such a sense of vertigo coming into the space that I was very well primed for the show to start right off the bat.

Tenara: Absolutely. I felt involved and implicated, which, by the end of the play, I think was important.

Nan: I think it’s really hard to do sets for a one person show, but the geometric armature they set up was incredibly versatile and successful! I loved how they also used its panels as a sort of screen to project on.

Tenara: Yeah the lighting interacting with the set was gorgeous. I really felt the “blue”.

Nan: They evoked the sky as a character through that alone. Really useful. It was such a versatile backdrop to work on. Especially combined with the lighting choices–I loved how they were able to shift quickly back and forth between the “drone trailer interior” and the “blue” so efficiently. It brought that conflict alive so effectively.

Tenara: And the desert. As someone who loves desert landscapes, I felt the designers elicited that imagery really effectively. What about Kittson’s performance? What were your responses?

Nan: It took me a little while to be absorbed enough in the story to stop watching her act. But I think some of that may just be that it’s incredibly hard to get a one hander off the ground, and that the script was maybe a little stilted at the beginning. By the end I was totally there, but it did take awhile.

Tenara: Hmm, interesting. I think I see what you mean.

Nan: I also am an actor and decided to see the show partially for the purpose of watching her act, though. So there’s also that.

Tenara: I agree that it did feel like the script took its time getting to where the story wanted to be and so you could see that in her performance. But I definitely wasn’t disappointed by her performance! I think she was really great.

Nan: For sure. She brought such tremendous swagger to the character, and I don’t think another actor would have succeeded in that half so well.

Tenara: She was also just so skilled in all of the emotional blocking.

Nan: Yes! She didn’t miss a beat. Her technical skill is so sharp.

Tenara: I guess the only hesitations I have about Grounded are in the script. I thought the direction was great, the design was great, and the acting was amazing. The thing that I have trouble with is just in the pace of the script, and in some of the themes the playwright established but didn’t necessarily wrap up.

Nan: Yeah. I also had some difficulty with the pacing. I had the sense that it was trying to give the audience time to get used to themes and repeated themes before moving on?

Tenara: I don’t know. Maybe it was to establish the “old war” vs the “new war”.

Nan: Yeah. I think there was some unnecessary air between the birth of her kid and the actual Day One on the new war in Vegas.

Tenara: Totally. Actually what I was more interested in was in the dissonance that she felt in living as a civilian and as a soldier in this new war.

Nan: I also feel like things started to go downhill pretty quickly after starting in Vegas, and I would have loved more about what it was to be at war from home. I think that’s really the most unusual part of the play. But they headed down the path of breakdown pretty rapidly once she started in Vegas. It’s funny, the show is advertised as being about what happens when a female pilot “unexpectedly becomes pregnant”, but that part of the story is not what the play is really about at all.

Tenara: Yeah. That’s what I mean. There’s so much meat in this friction between living in a world that is not “in danger” and being the one that makes a world dangerous. It felt so Foucauldian, and I wanted so much more of that grittiness.

Nan: Agreed. And they waste a lot of time on the pretty rudimentary “pregnant/woman/pilot” conflict, which actually felt a tiny bit reductive to me.

Tenara: Absolutely. At one moment, I was like, “hey this is a play about being a working mother” which was interesting only in that she was in a largely male-dominated job. But then when we got to Las Vegas, I was like, ah. This is what this play is about. That’s why I had some trouble with the pacing of the script. Neither of those two things spoke to each other in a way that made me believe that they should have been connected.

Nan: Yeah– you only get to Vegas like halfway in, I think? And once that section begins, I started to feel like the time spent on the first half was sort of wasted because it was just backstory to the real event.

Tenara: Totally. It could have been a single male pilot encountering the problems she found in Las Vegas. Her being a woman and having a daughter was only important in that it delayed her from seeing the old war transition into the new.

Nan: Yeah. And then by the end (spoiler alert) the final arc of her trying to stop her supervisors and team members from killing the little girl in the desert, it felt a little poisoned as a conclusion? I was like oh, okay, we are going back to the idea of the woman being the one with “maternal instinct” which was the only reason we had the whole first half of the play.

Tenara: Mmmm I hadn’t even thought of that. That’s so true. I do have to say that I was OBSESSED with this play when she was listening to the CD. Oh my God, my political science brain was so happy. She was shaking off and compartmentalizing war in the span of an hour. And then, of course, she can’t. That’s where I felt the play really wanted to live. Or at least, that’s where I wanted it to live.

Nan: Yes! I agree. I also had that feeling purely in that I so wanted the play to have a social goal, or a strong political perspective, or something. But it wasn’t really taking a stand on drone warfare, I think, and it wasn’t really about women and war.

Tenara: What do you think it was taking a stand on? Because I feel like it was closer to drone warfare than anything else.

Nan: Yeah. If it was anything it was drone warfare. But by the end I think it was just sort of a story of a mental breakdown that was set in an usual context, with some insight about what it means to be a drone pilot?

Tenara: Hmm. That’s interesting, because I feel like it was about how drone warfare will inevitably precipitate a mental breakdown. In anyone.

Nan: I can see that. I guess my skepticism comes from the fact that they don’t talk about the violence of her job as a pre-drone flyer pilot at all, and then they do talk about the violence of being a drone pilot, and I feel like both are harmful in any case– and in some way the horror of the drone work is as much about being shut in a dark trailer and staring at a greyscale screen for twelve hours a day as it is about the killing, if not more.

Tenara: Absolutely. And there’s such a dissociation with dropping a bomb and zooming away and then being forced to watch the violence you create. I guess that also feels like an unexplored theme. And the bizarre fact that it is only once you are geographically removed from the region that you are forced to watch your own destructive contribution to the war. Once again, my political science brain was singing.

Nan: For real! There’s so much to explore there. I would have loved to see a show that was just her experience from day one of working at the base in Vegas.

Tenara: Absolutely. And that the necessary exposition for her previous work was somehow layered in. But at the same time, I see that these kinds of kernels that we’re thumbing through is because despite its flaws, Grounded is a pretty rich script. It may be structurally slow, but it has a lot going for it.

Nan: It’s true. There is a lot of great stuff there. I do wish there was a world in which the first half gets chopped and there’s more meat in the second to really make the show. But there’s certainly a lot there. I’m glad I saw it!

Tenara: Yeah. Overall a really great evening of theater. I also saw it on a night when there were a lot of young people there and that felt really good too! Not only were the theater students there, but I noticed that there were some undergrads who were looking at sociology and drone warfare texts. It felt nice that the play connected so many people who were coming to see it for different reasons.

Nan: There were not many young people my night, and I was very curious what all the older couples in the audience thought. I hope it made people consider perspectives other than their own.